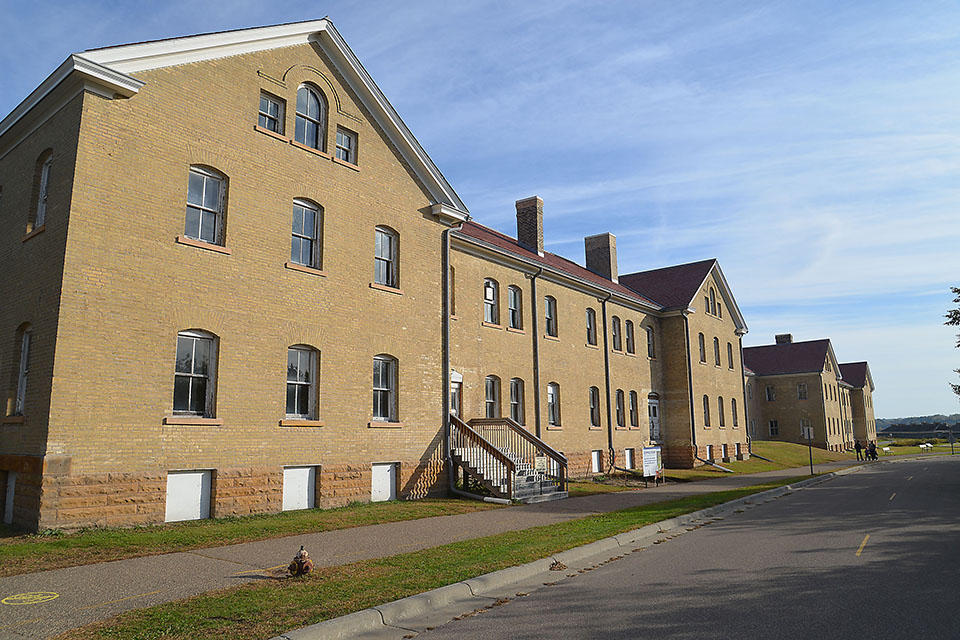 This story first appeared in the November issue of The Minnesota Legionnaire. The newspaper is free with an American Legion membership or $10 for annual subscription. Call 651-291-1800 to subscribe.

By Tim Engstrom, The Minnesota Legionnaire

No one, the Historical Society wants people to understand, is proposing to rename the entire Fort Snelling complex.

The society is asking Minnesotans whether the 23-acre part it owns and operates — the land around the original 1819 diamond-shaped fort — should have a name reflecting the broad span of history. Presently, those 23 acres go by the name Historic Fort Snelling.

Input meetings across the state have revealed strong emotions for and against a name change. Some favor “Bdote” while others favor keeping “Historic Fort Snelling.” Some prefer a combination such as “Fort Snelling at Bdote” and, in another twist, some dispute the term “Bdote.”

The Minnesota Historical Society held six input sessions around the state. One of them was on Monday, Oct. 14, at the Boy Scouts of America’s Base Camp just west of Historic Fort Snelling. About 70 people attended.

Maijala noted that, ultimately, any naming decision rests with the Legislature. Two state senators and one representative were at the Oct. 14 session. Others have appeared at the other sessions.

Like most historical preservation societies, the Minnesota Historical Society, at all of its sites, seeks to “deepen and enrich” its portrayal of a place by showing history over a broad reach of time, up to the modern, rather than a singular moment, said Rachel Abbott, the society’s manager of interpretive programs.

At Historic Fort Snelling, for instance, there are exhibits ranging from native activity prior to and during white settlement to Japanese-Americans breaking codes at the Military Intelligence Service Language School during World War II.

And meanwhile, Snelling is going through a capital project. The visitor center, built in the mid-1980s, is dilapidated and has water damage. The revitalization plan aims to build a new visitor center inside the 1904 cavalry barracks and the 1870-1880 ordinance warehouse at a cost of $34 million, with $19.5 million from the Legislature and the rest from pledges. It is slated to be completed in 2022.

The idea is instead of mothballing the historic barracks, repurpose them. Plus, it would allow year-round programming. Presently, the fort is open April to October.

“We know this can be confusing,” said Kyle Parsons, manager of inclusion and community engagement for MNHS.

He said the input sessions are one way of gathering feedback. The main way is the online survey, and other factors are key stakeholders, visitors and the society’s own strategic priorities. He said the task force gathering the input is not favoring one way or the other for a final result and is open to any possibility.

“It could absolutely be Historic Fort Snelling,” Parsons said.

At the session, feedback was about equal for both sides. Some said they felt changing the name covers up history or rewrites history. About as many felt a need to be inclusive, but near the end, people heard another take.

Ed LaBelle, a Dakota born 86 years ago on the Sisseton reservation in South Dakota and a Twin Cities resident since World War II, spoke Dakota and English at the Base Camp meeting, noting the holiday, “By the way, Happy Columbus Day,” and mentioned the connection among all who live in the region, “Dakota means alliance.”

He said “Bdote” is not a word in Dakota language. He said “Bdo” means white potato. He said the confluence of the Mississippi and Minnesota rivers is spiritual to the Dakota, reminiscent of how a man and a woman form a child.

“This is one of our great beliefs,” he said.

He offered alternatives in Dakota language for Holy Earth. LaBelle served in Korea and his father fought in World War I.

Historian Bruce Glasrud said Historic Fort Snelling “is not a very elegantly inclusive name” and added “Bdote is historically not what it was called,” noting the band that lived nearby called it “Mdote.”

“If we really are bent on changing the name, let’s use something that is accurate,” he said.

Tom Dimond, who wore a veteran hat to the input session, disliked changing the name. He felt the society’s efforts focus too much on the stone fort and not enough on the entire complex in telling stories and in repair efforts — existing fort buildings, not re-made ones.

Pointing toward the Upper Post, then the old stone fort, he said, “Those are Fort Snelling just as much as that is Fort Snelling.”

Michelle Tonozzi grew up at Fort Snelling after it was decommissioned in 1946. She said it was a perk for Veterans Affairs employees to live in the former officer quarters. Today, she lives nearby in the Macelester Groveland neighborhood of St. Paul and walks Pike Island and Fort Snelling.

She said when she was a child, they knew nothing of the history of native peoples at the site. She favored “Fort Snelling at Bdote” or “at Mdote,” whichever is proper.

Margret McCue, society member and a fifth-generation Irish-American, said she takes great pride in marching in the St. Patrick’s Day Parade. She said, like with the Irish, there is room in the Twin Cities to share cultures.

The input session left people with questions about the term “Bdote.” The Legionnaire reached out to Kate Beane, director of Native American initiatives for the Minnesota Historical Society and a member of the Flandreau Santee Sioux.

She said it is well-documented that Dakota called the confluence Bdote or Mdote. She said the orthography — the way spoken words are written into letters — differs based on dialects, as happens in any language. In any interpretation, she said, it is a soft B that is almost an M.

“All are correct is the interesting point,” Beane said.

She said Dakota and Lakota are part of the larger Siouxan language, and people from various dialects can understand one another. Often, however, the words might not fit precisely into the English-pronounced alphabet.

She noted the Stephen Riggs dictionary as one documentation of the geographic use. The Dakota dictionary written in 1852 by Riggs, a Christian missionary who lived among the Dakota starting in 1937, is available for anyone to see at online at archive.org. The book does not offer “Bdote” but has an entry for “Mdote.” The entry, which employs a geographic explanation in parentheses, says: “n. the mouth or junction of one river with another (a name commonly applied to the country about Fort Snelling, or mouth of the St. Peters; also the name appropriated to the establishment of the Fur Company at the junction of the rivers, written Mendota): the outlet of a lake.”

The St. Peters is the Minnesota River. The Riggs dictionary explains the book’s orthography. It says B and M have the same sounds they do in English. However, Riggs added: “Some Dakota, in some instances, introduce a slight b sound before the m.”