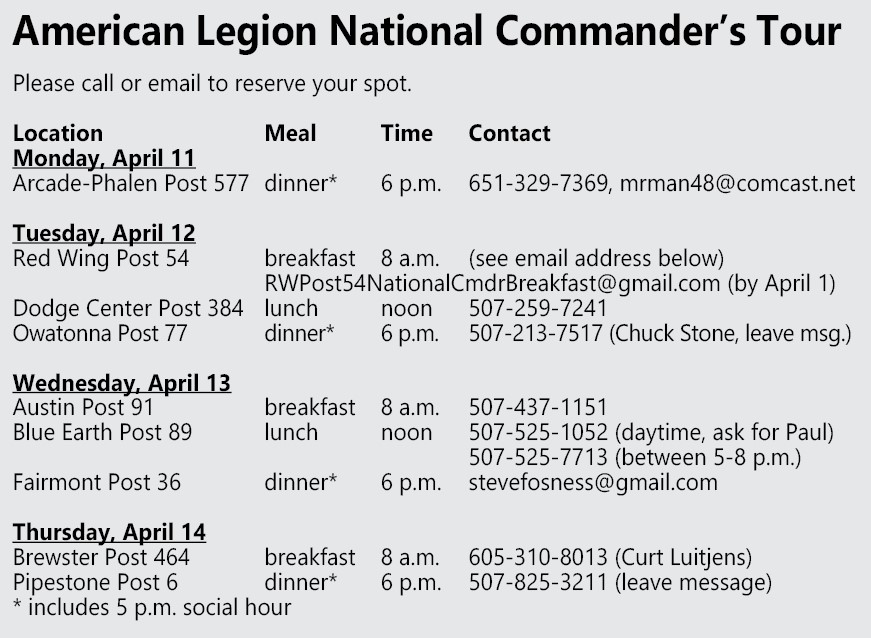 By Tim Engstrom
The Minnesota Legionnaire

ST. PAUL — The American Legion National Commander’s Tour of Minnesota starts in the Twin Cities and heads south this year.

National Commander Paul E. Dillard is all set to tour the state April 10 to 15. He was elected national commander on Sept. 2 at the 102nd national convention in Phoenix. His theme is “No Veteran Left Behind.”

The national commander later that day visits with Minnesota Department of Veterans Affairs Commissioner Larry Herke and some of his staff.

The public is invited to hear the national commander speak when he visits American Legion posts. See box on Page 3 for registration contacts.

The first one is that night at St. Paul Arcade-Phalen Post 577 with a social hour at 5 p.m. and dinner at 6 p.m., followed by a program.

Three more posts are on the schedule for Wednesday, April 13. Breakfast will be at 8 a.m. at Austin Post 91. Lunch is at noon at Blue Earth Post 89, and social hour and dinner are 5 and 6 p.m. respectively at Fairmont Post 36.

The Fairmont stop will be double interesting in that the Post 36 members can show off their new post home at 300 Downtown Plaza.

On Thursday, April 14, Dillard will have breakfast at 8 a.m. at Brewster Post 464 and social and dinner at 5 and 6 p.m. at Pipestone Post 6. He will visit the Luverne Veterans Home during the day.

He flies out of Sioux Falls on Friday, April 15.

About the national commander

Dillard is a member of Lake Kiowa Post 265 in Texas and joined The American Legion in 1969.

He graduated from Whitesboro High School in 1965, then joined the Navy, serving through four campaigns in Vietnam including the Tet Offensive.

He served in the Navy Reserve, too, before receiving an honorable discharge and attending Grayson County Junior College and East Texas State University.

He worked in manufacturing as an engineer, plant manager and a director. Later, he became an airplane pilot for a cast-iron foundry. He and his wife, Donna, entered the insurance business, specializing in employee benefits. They founded Dillard & Gann Insurance.

Dillard served as post commander, vice commander, adjutant and judge advocate. He coached American Legion Baseball for more than 10 years and served as his post’s Boys State chairman. He has been a district commander and vice commander. Before serving as Texas commander in 2007-08, he was sergeant-at-arms and membership chairman, in addition to chairing several committees.

He and Donna married in 1983, and they have two grown sons, William and Jonathan, and two grandsons, Jarrett and Lukas. Donna was Department of Texas president in 2017-18.