This is a time to renew our pledge to remember

Editor’s note: This is a printed Memorial Day speech for people who cannot attend an in-person ceremony or whose local ceremony has been canceled because of COVID concerns. Let Maj. Gen. Shawn Manke’s words serve as a way to reflect during this holiday. The Minnesota Legionnaire grants permission to reprint this speech in local newspapers.

For most it is a day to look forward to the summer ahead. Perhaps it is ironic, that this weekend of celebration is anchored by a day intended for solemnity and intended to remember the past. 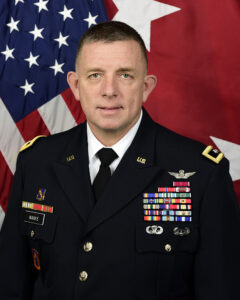 Memorial Day is our nation’s day to remember those who perished giving their all for the nation they loved. Its inception began with families remembering those who died at the end of a war we fought within our own borders, a war fought between states, amongst brothers, that left 600,000 dead, missing from families, graves to be adorned.

It was the simple act of honoring and adorning soldiers’ graves with the flowers of May that gave birth to Decoration Day. Now known as Memorial Day, it was officially observed the first time on May 30, 1868, at Arlington National Cemetery. It was a date not selected as the anniversary of a battle, but because the flowers would be in bloom all over the country, so everyone could recognize the fallen soldiers.

It is not a day to commemorate war. It is a day to celebrate valor and patriotism, to decorate the graves as a reminder of the costs of war, and to commemorate the lives sacrificed by men and women, and it is also a day to grieve with those left behind.

I paraphrase Gen. John Logan at the first Decoration Day, “We should not only remember those ‘who died in defense of their country,’ but to also ‘renew our pledges to aid and assist those whom they have left among us…the widows and orphans.’”

To these Gold Star families, Memorial Day is particularly sacred. To them, the loss is tangible by a missing family member and a chair at tables that remains unfilled.

Last year, many of our Gold Star families stood alone on Memorial Day due to pandemic restrictions. The gatherings at cemeteries were canceled or altered. This past year through the efforts of National Guard members and others across the nation, we have fought against COVID-19, providing community-based testing and vaccinations to people across our country. In Minnesota alone, our National Guard soldiers and airmen have provided more than 100,000 days of COVID-19 support.

This year as pandemic restrictions begin to lessen, we hope to stand once again in decorated cemeteries among our fallen service members, in solidarity with Gold Star families. It’s important that we all do what we can to remember the importance of Memorial Day, and the sacrifices of the fallen.

Attend a local event, observe the National Moment of Remembrance at 3 p.m., pause for one minute to remember and reflect. As President Calvin Coolidge stated after the end of World War I, “The nation which forgets its defenders will itself be forgotten.”

The observance of this day is so important, we must never forget the blood that has been paid to get us to where we are.

Yes, Memorial Day does mark the beginning of summer, a summer that could potentially be a turning point in our history. But do not forget, Memorial Day is so much more than barbecues and picnics; it is the day we remember the sacrifices that have paved the way for the freedoms we hold dear, and the future we will have together as a nation.

Maj. Gen. Shawn Manke assumed duties as adjutant general of the Minnesota National Guard in August 2020. After ROTC at the University of North Dakota, he served in the active Army in Germany, Iraq and Texas. He joined the Minnesota National Guard and held staff and command positions, most recently as assistant division commander for operations of the 34th Red Bull Infantry Division. He is a graduate of the Army War College, Command and General Staff College, Aviation Officer Course and Airborne and Air Assault schools. He is a member of The American Legion.