By Tim Engstrom
The Minnesota Legionnaire

ST. PAUL — Veterans Day on the Hill on April 20 was a time to tell state leaders about legislation Minnesota military veterans want passed, but this time around, it also was the farewell for state Rep. Bob Dettmer, the House’s ranking member when it comes to veterans affairs.

Dettmer, a member of Forest Lake Post 225, is not seeking re-election this fall. He was first elected in 2006. He is a retired teacher and Army Reserve chief warrant officer. He and his wife are moving from Forest Lake to Florida but plans to visit Minnesota in the summers. His sons, both West Point graduates, are now lieutenant colonels in the Army.

“They outrank me, so I have to salute them,” he told the Legion, VFW, DAV and Amvets members gathered at the Capitol Rotunda. “But I tell them I am the commander in chief in my own house — whenever their mother isn’t around.” 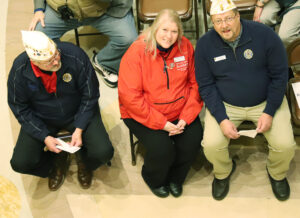 Some of Dettmer’s accomplishments were eliminating state tax in military pensions, securing funding for three new veterans homes (construction begins this fall), eliminating the eight-year limit spouses faced to receive the homestead property-tax exclusion, allowing those spouses to have a one-time change of residence while keeping the exclusion, securing funding for the construction of the Medal of Honor Memorial at the Veterans Service Building (presently under construction), expanding the Minnesota G.I. Bill to include apprenticeships and on-the-job training, lowering property tax rates for VFW and Legion posts to 1 percent, authorizing Purple Heart cities and counties and designating March 29 as Vietnam Veterans Day in Minnesota.

Dettmer cited a list of unfinished business. Eliminating property tax altogether for VFW and Legion post homes was among them. Dettmer was able to get the language into the tax bill this session, but the Tax Committee chair yanked it out the next day.

Presently, many tax assessors across Minnesota still fail to recognize state law regarding the 1 percent rate for post homes, and rising taxes has caused many post homes to close, leaving veterans without resources. The Minnesota American Legion is working to bring it to 0 percent and without needing to file annually. (National Commander Paul Dillard, during his tour of Minnesota in mid-April, said his home state of Texas does not impose property taxes on post homes.)

Dettmer called for reducing taxes on charitable gambling so the Legion and VFW posts can provide more charity to their communities. He also called for the state to ensure military recruiters have access to high schools.

He said he was endorsed by his wife to retire. They have eight grandchildren.

The No. 1 push of Veterans Day on the Hill was asking lawmakers for a veterans omnibus bill.
Dilks said he is sick and tired of veterans legislation being used as a political football to pass other bills. A veterans omnibus bills keeps partisan politics away from veterans’ issues.

“We can do better, and that is why we are here today,” he said.

Gov. Tim Walz, a Legion member of Mankato Post 11, said he would much prefer to have veterans-related legislation in a veterans omnibus bill, rather than this and that language tacked into other bills. He said he would sign it.

He cited the Russian invasion of Ukraine as an example of how fragile democracy can be.

He praised the veterans organizations for working to get the Veterans Restorative Justice Act passed in 2021.

The chairman of the committee that handles veterans affairs, Robert Ecklund of International Falls, a member of Minnesota At-Large Post 1982, said the House has a veterans omnibus bill that includes funding to assist the Minnesota Department of Veterans Affairs with its suicide prevention efforts.

“This includes education at places where guns are for sale, proactive engagement with at-risk veterans and the development of a pilot for mobile mental health crises services tailored for veterans,” Ecklund said.

He said the bill also allocates $10 million toward ending veteran homelessness. The goal is to have temporary supportive housing to deal with veterans experiencing homelessness and permanent housing so veterans have a place to meet needs, and funding support for landlords to encourage them to offer tenancy to veterans.

“Have we got a bill for you? The veterans bill has about everything we talked about today,” Ecklund said.

Haugen noted the state says there are 312,843 veterans in Minnesota, and if families are added in, that brings the legislative clout of the veterans community to 1 million votes.

Prior to the Rotunda, the veterans enjoyed a catered meal at the Armory, paid for by the DAV of Minnesota. There, Lovald recognized American Legion Auxiliary Honorary Junior President Ashley Stai, an 18-year-old who set out to raise $1,500 for MACV. She raised over $10,000.

MACV is the Minnesota Assistance Council for Veterans and it offers housing, employment and legal services to veterans in need.

Notably absent at Veterans Day on the Hill and all other state legislative advocacy for veterans are people from the array of nationwide “pop-up veterans organizations” whose main missions seem to be fundraising, not veterans.