Ray Kane is an organ recipient

ST. PAUL — The American Legion Department of Minnesota Veterans Affairs & Rehabilitation Committee has hired Army veteran Ray Kane of Hastings Post 47 to be the next department service officer. He will office on the first floor of the VA Medical Center in Minneapolis. 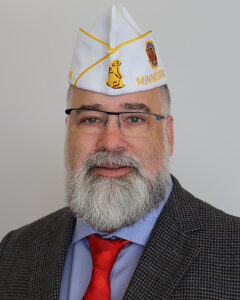 “Ray’s passion and determination to help veterans was just unparalleled among the applicants,” said VA&R Chairwoman Marissa LaCourt. “We are sure he is going to do a fine job of piloting the ship and handling new ideas.”

The prior DSO, Jeremy Wolfsteller, moved on in November.

Kane graduated from Eagan High School in 1991 and went to basic in July that year at Fort Benning. He was all set to be an 11B infantryman for the Army Reserve, but the powers that be shut down the unit in Cannon Falls, and he had to retrain for a new specialty.

He ended up a radar surveillance operator with the 134th Military Intelligence Battalion at Fort Snelling. He did that for a few years, and as soon as Kane made sergeant, the Army closed the battalion. He was recruited to the Minnesota National Guard, and he served as a Bradley Fighting Vehicle operator with a 34th Infantry Division unit drilling out of the East St. Paul Armory.

Kane became a Bradley trainer, and he did a lot of pre-basic recruiting, too. He is mentioned in former state representative and motivational speaker John Kriesel’s book. Kriesel, who lost his legs and two buddies to a roadside bomb in the Iraq War, was one of those young pups Kane trained.

Because of his busy civilian work schedule, Kane exited the National Guard in 2006.

In his civilian career, he managed a child care center, then worked many years in retail as a manager. Retail managers work difficult hours.

In 2012, while he was manager of the T.J. Maxx in Brooklyn Park — a long commute from Cottage Grove — he was driving home after work and his vision of the road was blacking out.

Kane pulled over, spotted a hospital sign, then drove to Woodwinds Hospital in Woodbury. He gave his car keys to a security guard and woke up three days later in the intensive care unit.

It turns out, he is a Type II diabetic. His kidneys were at 20 percent, and, in some ways, he could trace some of the condition back to youth. He was put on dialysis and sent home.

He waited on a transplant list for six months. On Nov. 10, 2012, doctors at the Mayo Clinic in Rochester gave him a new kidney and a new pancreas. The old ones are still in his body, too. So he has three kidneys and two pancreases.

His donor was a 42-year-old woman from Georgia.

“That’s why I say my best parts are my girl parts,” Kane said.

Kane has two eagle tattoos, and he wasn’t easy to put under before the surgery. He heard one of the nurses called one of the eagles a parrot. He was still awake and aware, and he insisted it was not a parrot. The last thing he remembers before the anesthesia finally set in was a doctor saying, “We’re not going to call your eagle a parrot anymore.”

The scar extends from his sternum to below his navel.

Kane never returned to work. He used the new chapter in his life to go to volunteer in the community and attend college at Inver Hills Community College, where he got involved in the Veterans Resource Center. He graduated in June 2016.

He set out to become a nurse, but he learned that, with his diabetes and organ transplants, working as a nurse and encountering the sick would not be good for his immune system.

The college’s veterans coordinator, Sue Flannigan, told him his passion was veterans. He ought to pursue a career in that direction. He began to volunteer with Beyond the Yellow Ribbon in Cottage Grove and at Post 98 in St. Paul Park, where he soon became the 2nd vice commander and had to run events.

Kane went through another surgery in May 2020. Doctors removed half a foot of damaged intestines caused by pills he must take. It was right after the surgery that Kane organized a Legion and Yellow Ribbon drive to provide care packages to National Guard troops deployed to civil unrest in Minneapolis and St. Paul.

His retail experience became handy for understanding gambling numbers, and he began as the assistant gambling manager for the Lions in June 2020, and by January 2021, he was the gambling manager. The club oversees pulltab booths at Franke’s Corner Bar and Broadway Bar & Grill, both in St. Paul Park.

“I’ve been solving veterans issues for 10 years,” Kane said. “When this position came open, I was running for department historian, but this is my passion.”

With the new staff position, Kane’s campaign for historian ends. Christopher Anderson of Hastings Post 47 has decided to run for the spot.

In addition to assisting veterans, Kane will coordinate with posts needing to help veterans through the Minnesota Veterans Assistance Fund.

Since starting, Kane has been conducting follow-up visits with veterans, getting to know VA hospital leaders, talking with patient advocates and making veterans aware of rights and benefits.

Kane has two dogs and no children. He is in a long-term relationship with a Hastings woman named Amanda, who has two children of her own.