Angel O. Narvaez of Carolina, P.R., is a member of American Legion Pedro J. Rodriguez-Oquendo Post 129. He joined The American Legion in 2005 after his retirement from the military. Narvaez served in the U.S. Army from 1980 to 2004, beginning as a military policeman and advancing in ranks from private through first sergeant.

Narvaez served as Department of Puerto Rico commander (2013-2015) and National Executive Committeeman (2016-2021). He has served on several post, district, department and national committees. He most recently served on the VA&R national committee prior to his election as national vice commander. He is a graduate of The American Legion National College class of 2012.

Active in community service, he has served as Cub master and Scout master, P.R. Open (PGA) golf tournament volunteer, and is part of his church board. Narvaez has been married to the former Rosa Hilda (Taty) Velez since 2000. They have four children, Angel who works at the University of Alabama, Tuscaloosa, Michelle Haselhorst who is a homemaker, Amy B. Mazza who is copy writer, and Camille Quiñones who is a publicist. 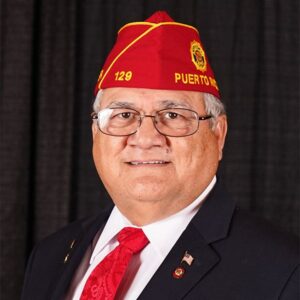